A successful strategy? It’s all in the implementation…

Leigh Thompson, Policy Manager, blogs about the seven new investment principles of Sport England's new strategy and what they mean for organisations looking for funding.

On 19 May, Sport England released its new sports strategy, Towards an Active Nation. A week later, Sport England Chief Executive Jennie Price gave the keynote address at our Sports Summit to outline the main elements of the strategy. It was a memorable performance for a number of reasons. Not only did Jennie manage to deliver her entire presentation despite suffering from a severe bout of ‘flu, she also made it clear that the new strategy marked a clear line in the sand: things are going to be different from now on. Certainly from where I was sitting there was a palpable sense of anticipation in the room about what the new approach might bring, both for the more established governing bodies but also some of the newer providers on the scene.

Show me the money

Amid the flurry of ‘outcomes’, ‘KPIs’ and ‘lines of sight’, what does it all mean for the sector? I cannot hope to answer this question in its entirety in this blog but a useful place to start, as always, is with the money.

Over the strategy period 2017-2021 Sport England plans to invest approximately £1billion in sport through seven dedicated programmes. Of this total, 25% (£250m) is earmarked for dedicated investment in tackling inactivity. This £250m comes from a combination of dedicated project spend (13%) plus a proportion of the spending on local pilots and facilities. 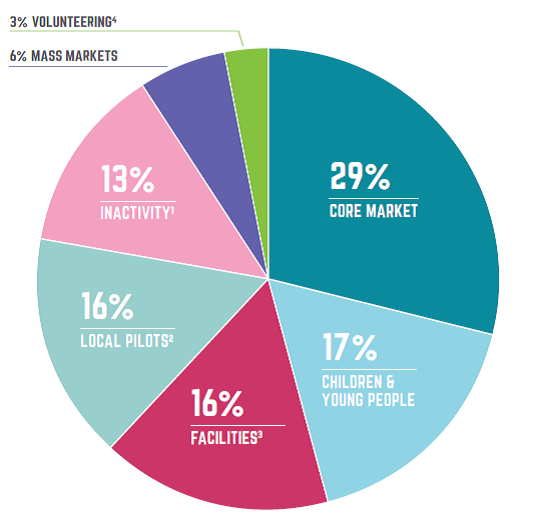 Compare this to the previous cycle (2012-2016) in which Sport England invested broadly the same amount but with a significant proportion (38%, over £400m) going to NGBs, mainly via the Whole Sport Plans programme. 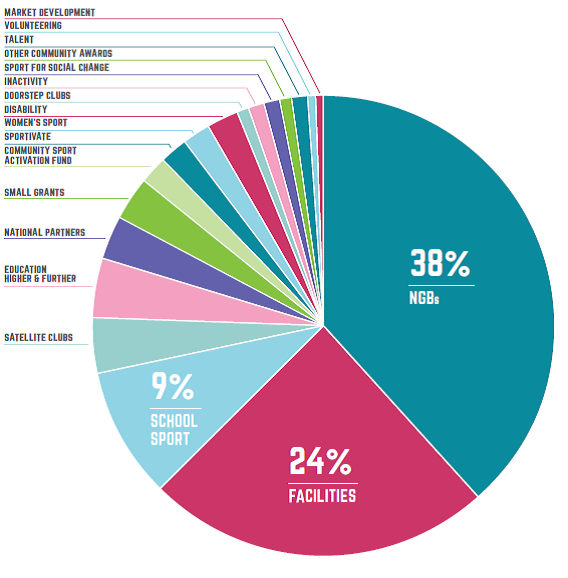 Importantly, the new strategy is agnostic as to precisely who should receive funding – many will be speculating that Whole Sport Plans have been read the last rites – which reflects the broader move to an outcomes-led approach.

However, it does not follow automatically that NGBs will lose out under the new regime. Looking at the new division of total funding, those NGBs that are already doing good work with the inactive, under-represented groups and children and young people should in fact be well placed to benefit. Indeed, NGBs are well placed to contribute across many areas, perhaps most strongly in keeping the ‘core market’ active, but also more broadly. Outside of traditional NGBs, many of our other members will have opportunities to access funding, particularly those that utilise sport for social good and regional/local organisations – such as CSPs – that are able to coordinate or deliver projects at local level.

Investment principles – the devil is in the detail

The seven new investment principles set out in the strategy give a clear indication as to how future funding will be prioritised. Equally a number of the principles hint at some of the issues Sport England must address in implementation in order to ensure the strategy is the success we all want it to be.

An important principle – and one that was reiterated by Jennie Price – was the use of behaviour change to make investment choices. This approach aims to focus investment on the inactive and in particular on those that have not yet even attempted to take up sport or physical activity – in the jargon those in the ‘pre-contemplative’ or ‘contemplative’ stages of behaviour.

This sounds logical in theory. However, it remains to be seen how the behaviour change model will be applied in practice to decide between competing investments. In particular, while it is a useful tool to help understand how an individual moves from being inactive to becoming active and the barriers they face at each stage, it nonetheless remains a model – a stylised version of reality. Is it capable of guiding decisions on whether or not to fund large-scale, population-level interventions and, if so, how does Sport England intend to define the criteria it will apply? These are the sorts of questions to which the sector will be seeking answers when Sport England issues its investment guides in the near future.

A second principle worth closer scrutiny is the commitment to review the investment portfolio regularly and remove funding if an investment is failing and cannot be rescued. Interestingly, Sport England makes explicit that it will “learn from how private equity approaches its investments by setting clear targets but also evaluating potential.”

Again, the logic seems fairly clear: in a world of constrained resources, programmes that show quick returns will be rewarded, those that don’t will be dropped. However, the tension that arises here is between an approach that is, on the one hand, designed to identify ‘winners’ quickly and investments, on the other, that will often be resource-intensive and have a long-term payback. Indeed, the strategy recognises explicitly the time and cost required to get the inactive to become active: “We must not underestimate how difficult it can be to make this change...it is likely to take both time and some tailored support to get [inactive people] involved, and even longer to create a resilient habit.”

In this context, it is critical that the investment strategy is applied flexibly and the incentives built into it are calibrated carefully. If not, there is a risk that the rigid pursuit of a fast payback strategy could lead to investment being withdrawn before a potentially successful project has had time to generate tangible results. Equally, if the incentives are too sharp, there is a risk that those delivering projects are tempted to ‘game’ the numbers in the short run in order to secure additional funding instead of focussing on delivering long-term, sustainable impact.

Thirdly, and finally, there is an emphasis on encouraging increased efficiency. Sport England is clear that organisations currently reliant on significant levels of public funding will need to wean themselves onto new, private sources of income for example through the monetisation of assets. To help achieve this aim, the strategy envisages the establishment of “targets to reduce organisations’ reliance on any single source of public funding and increase their overall level of non-public investment”.

Again, while sensible enough, setting targets will not, of itself, deliver a reduction in the reliance on public funds. In practice, the process of transformation envisaged will be difficult and may take several years. What will be critical is the provision of support, expertise and investment in capacity building to enable organisations to sustain themselves.

In this context the recognition in the strategy of a need for collaborative working – including working with the Alliance to identify shared service opportunities – is welcome. Nonetheless there remains a legitimate question as to whether Sport England, given the breadth of its responsibilities under the strategy, has the capacity and the commercial acumen to help organisations diversify and grow their income. In this respect it was reassuring to hear Jennie Price indicate during her Sports Summit Q&A session that Sport England recognises this is an issue and is looking to ensure it has the right blend of skill-sets to support delivery of the strategy.

Overall, there is much to ponder in the strategy and I agree very much with Jennie Price’s recommendation at the Summit that the sector should take time to reflect carefully on what it contains. Equally, I’ve no doubt many in the sector will be keen to see more of the detail on Sport England’s investment approach in the coming weeks and months.