Success is a cycle built on inspiration

Adrian Ruth, Alliance board member and Director of Spark and Sustainability at the BBC, blogs about his Olympic inspiration that led him to take part in July's RideLondon event.

At the end of July, I cycled a hundred spectacular miles as part of the RideLondon-Surrey 100. The route is closely based on the London 2012 Olympic road race, taking in famous London landmarks, picturesque Surrey towns, breathtaking countryside and the iconic zig-zag road up Box Hill.

This is RideLondon’s fourth year - it started in 2013 as one of the most visible legacy events from the golden summer of 2012. It has grown each year - nearly 27,000 cyclists attempted the hundred miles this year. It’s like the London Marathon on wheels - and like the marathon, it helps to raise millions of pounds for hundreds of charities.

I also took part in the 100 mile cycle in its 2013 debut - getting myself a new road bike to tackle it.  I’d never ridden anything like that before (I’m not sure I’d even heard the word “sportive”) but I’d seen the emergence of British cycling superstars Bradley Wiggins, Laura Trott, Mark Cavendish, Chris Hoy et al in London 2012 and the Tour de France, and it inspired me to give it a go. Hopefully the stunning success in the velodrome again in Rio 2016 will inspire even more people into cycling - perhaps among them future Olympic medallists?

I remember the morning of my first RideLondon well - I’d put in the training (many, many circuits of Richmond Park, and a few trips out to practice on the Surrey Hills) and now the big day had finally arrived. It was an early, chilly start in the Olympic Park - but I was still warm inside from the enormous volume of porridge I’d consumed. I was armed with energy gels galore, along with the more traditional cyclist nutritional supplies of jelly babies and salted peanuts.

My initial nerves gave way to sheer joy, revelling in the glory of cycling through London, past so many familiar sites like St Paul's and the South Kensington museums, on roads populated only by people like me, on two wheels without engines. I progressed well until a bit of a wobble at Newlands Corner when I felt an unexpected twinge in my right calf.  At this stage, I knew I had the biggest hills and more than half the ride still to come - this was definitely not part of the plan.

But like so many people when they tackle these kind of personal challenges, I soldiered on - had a good stretch, refuelled and cycled (very slowly) up the notoriously tough Leith Hill.  I was so proud of myself that I didn’t get off to walk, but sincere apologies to the spectators and cyclists who may have been somewhat distracted by my singing Pet Shop Boys songs out loud (a cunning way of distracting myself).  It was the knowledge that so many people had sponsored me, raising over £2,000 for a cause very dear to my heart, Macmillan Cancer Support, which drove me on. 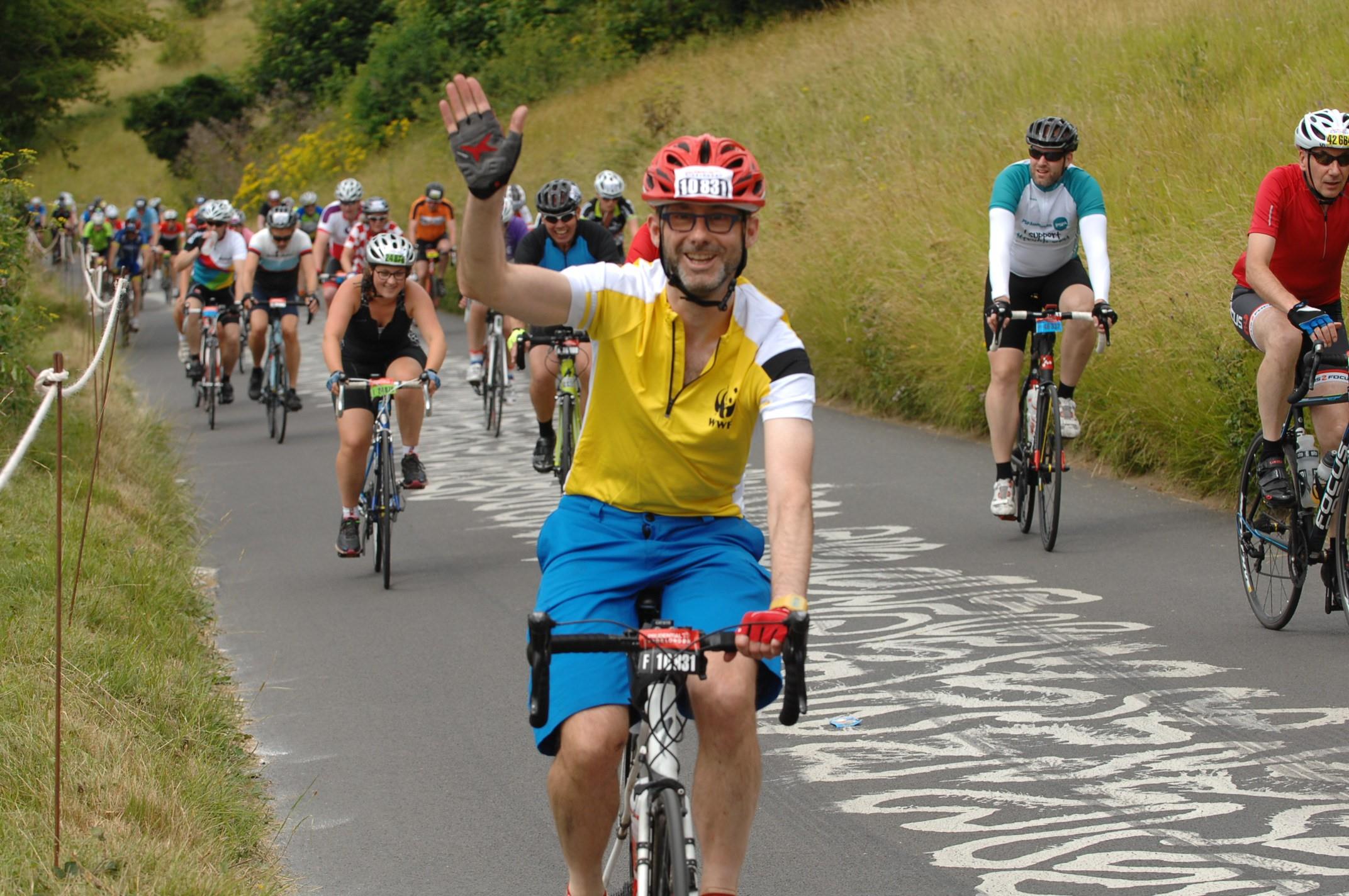 That proved to be the toughest point, though my mum punching me quite hard in the shoulder at the 85 mile point was a close second.  I think she was just excited to see me, but perhaps she was upset that I’d eaten all the jelly babies.

Eventually, around eight hours after setting off, I found myself cycling along the Mall towards the finish line and Buckingham Palace, shattered but elated, having had one of the best days of my life.

Since then, cycling has definitely become a much bigger part of my life - and there’s no doubt that I’m healthier and happier as a result of it. The Tour de Yorkshire, the Coast to Coast, cycling to Glastonbury, track cycling at the London 2012 velodrome, the London Bike Beer Group, countless “Lost Lanes” - so many happy memories.

And so I came to tackle the 100 mile cycle for a second time, on this occasion as part of “Team Panda”, raising money for WWF.  This time, my wobble came even earlier, when due to a serious accident further ahead, we were stationary or walking slowly for more than an hour.  When we finally re-started, my legs felt like lead and I could barely turn the pedals. Thankfully, once again my old friends (jelly babies and Pet Shop Boys) came to the rescue, and I got through it.  The satisfaction of cycling the hundred miles wasn't diminished by the fact that it was my second time - I still got ridiculously excited passing the cheering crowds in Trafalgar Square and the Mall.  If anything, it’s made me even more motivated to keep taking on these kind of challenges.

My story, like so many others, is a familiar one. I was inspired by the achievements of elite athletes on a global stage to get up and try the activity for myself. Thousands of others will be able to tell similar tales, from completing 5ks and fun runs through to triathlons and marathons, we have all been inspired to "try our kit on".

As a newly appointed member to the Board of the Sport and Recreation Alliance, I'd encourage everybody to #TryYourKitOn and give a new sport or activity a go this summer. Whether you're a novice or a veteran, there are so many ways to get involved with sport and recreation. Visit the #TryYourKitOn webpages for more information on what's on offer.