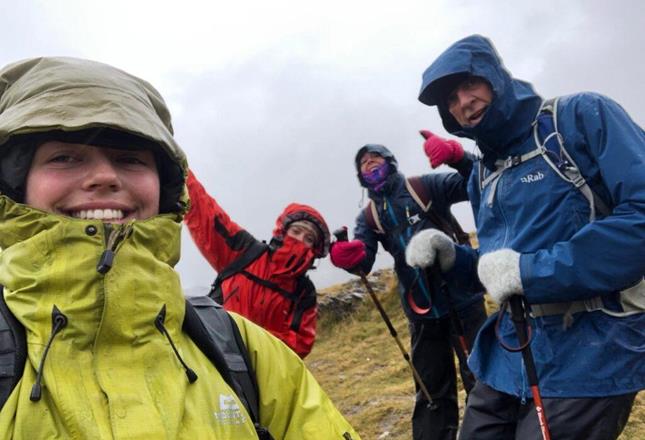 A new year is a time to set new challenges, make resolutions and look ahead to what’s to come.

As we get ready to welcome in 2021, we caught up with Active Cheshire to learn more about their #MyMountain campaign and why it could be the perfect goal for you next year.

In 2016 Active Cheshire carried out research with the University of Chester that explored the thoughts and motivations of individuals who identified as being inactive across the region.

The research, in which almost 60% of respondents were female, revealed that participants felt that intrinsic influences such as confidence and ‘a choice to be active’ were harder to overcome than external barriers, and that enjoyment and support were key to conquering inactivity.

Almost five years on and it appears the differences in physical activity between men and women are still apparent, with Sport England’s 2020 Active Lives Adult Survey showing that 65% of men are active compared to 61% of women.

In addition, recent research from Public Health England shows that one in four women across England are classed as physically inactive and almost 50% are not active enough for good health, meaning they are active for less than 30 minutes a week.

These findings have led to Active Cheshire offering the opportunity of a lifetime as part of their #MyMountain campaign.

After hundreds of applications and interviews, Sam Lyon, Emily Oakes and Phoebe Jay will be climbing Mount Kilimanjaro, the highest mountain in Africa, in 2021.

Nick, who is also the High Sheriff of Cheshire, joins the group in hoping to raise £50,000 for the Onside Warrington Youth Zone, a charity that believes in ‘inspiring young people to achieve’.

In 2022 the charity will move to a state-of-the-art facility that will provide young people with a safe and inspiring place to spend their leisure time away from home and school. To support the £50,000 goal, Sam, Emily and Phoebe will each be raising £2000.

The climb, however, only represents half of the campaign. Active Cheshire knows that everyone has their own physical activity mountain to climb, and that there is no ‘correct’ way to be active.

Whether it’s doing Couch to 5k, improving your daily step count or running a marathon, the campaign is calling on all Cheshire and Warrington based women to ‘find their active’ and celebrate their achievements to inspire, unite, and provide support for one another.

Amber Lomax, National Partnerships and Contracts Manager at Active Cheshire, spoke to a couple of people involved in the initiative to discuss what their mountain is:

"My mountain has been to regain my physical strength in the past three years: due to my work commitment as an interpreter and international travels, I developed Pulmonary Embolism after one trip to China in 2017. The recovery was long and I eventually became severely anaemic at the end of the six months treatment.

“Watching my daughters playing cricket and not being able to join in like other parents was hard, I was too weak to even fast walk. I decided to join the gym and started to rebuild my strength back. Like all journeys in our lives, it takes time and motivation. As soon as I was strong enough to slow run my daughter’s cricket club invited me in to help with training.

“Meeting like-minded volunteers at the club motivated me to dedicate my spare time to strength training. I can now proudly say that I feel strong and confident again. The regained physical strength has helped me to boost my mental health as every extra weight I can carry, every extra mile I can run have assured me that I am getting stronger and healthier. There is still an uphill battle ahead but now I am not only looking forward to challenging myself but I would also like to encourage more women to embark on their own journeys too!"

“Our mountain was to stick together even though we could not be together. We have Zoomed right through since we last trained in March and even got funding for fitness equipment that I took round to players so they could do some exercise at home. We think that we will return to training even closer than ever.”

These quotes represent just two of the many women inspired by the programme. To show the sheer size of the support network, Active Cheshire will be producing an outline of a mountain with the name of each woman who took part in the campaign when it concludes.

All women wanting to get involved can share videos, stories, photos or quotes by using #MyMountain and tagging Active Cheshire on social media.