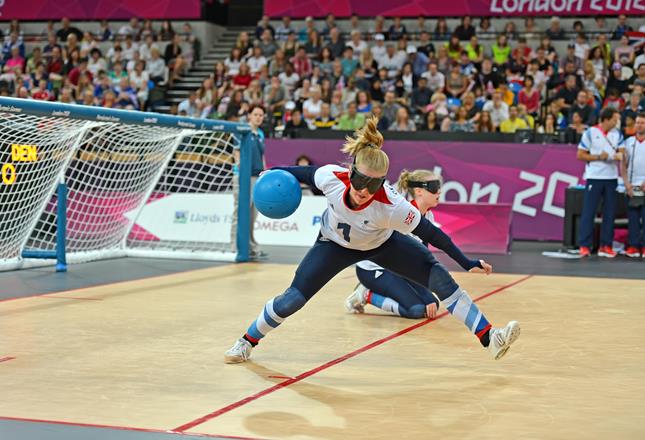 Goalball was developed in 1946 as a rehabilitation activity for World War II veterans and has since become the premier team sport for blind and partially sighted athletes worldwide.

Today, it is played competitively in over 100 countries and is considered one of the most exciting events on the Paralympic programme.

No nation has won more than two gold medals across the sport’s 11 Paralympic appearances, showing just how intense the race to the podium can be.

Tokyo 2020 promises to be just as electrifying and we got in touch with Goalball UK to relive some of the nation’s best Paralympic goalball achievements and find out more about how you can begin your journey on the court.

What would you say have been some of goalball’s greatest Paralympic moments?

The standout moment for British goalball was the fearless run deep into the competition from the women’s team at London 2012.

The women’s squad exceeded all expectations and made it to the quarter-finals. The team were eventually undone by a late golden goal with the match finely poised in extra-time.  Although deflating at the time, it was a pivotal moment for goalball in this country for many reasons.

It demonstrated that Great Britain’s goalballers can compete with the best teams in the world. What’s more, the exposure that the sport received for the performances at the Paralympics was sensational. It is estimated that participation at grassroot level grew by over 400% across the country and inspired a new generation of goalballers.

Who is goalball ideal for?

Goalball is a sport designed for blind and partially sighted people. However, everyone is welcome to give the game a go, regardless of their level of sight and can even play at club level if they are sighted. As each player wears blackout eyeshades, goalball is played on a level playing field.

For many blind and partially sighted people, goalball is the perfect sport to play as it is the only one specifically designed for people with sight conditions, rather than an adaptation of existing sports.

As well as taking to the court, there are many opportunities for people to get involved with coaching and officiating. So, it is perfect for anyone with an interest in visually impaired and Paralympic sports or just someone who wants to get involved with a unique and exciting game.

The best place to start is by checking the Goalball UK website. Here, those interested will find a list of clubs across the country and details about their training. Each club is incredibly welcoming of new players, no matter their age or level of ability.

Once you have found a club and attended training, if players want to, they can compete with their teams in the Goalball UK National League tournaments. At these events, there are three levels of competition – novice, intermediate and elite. 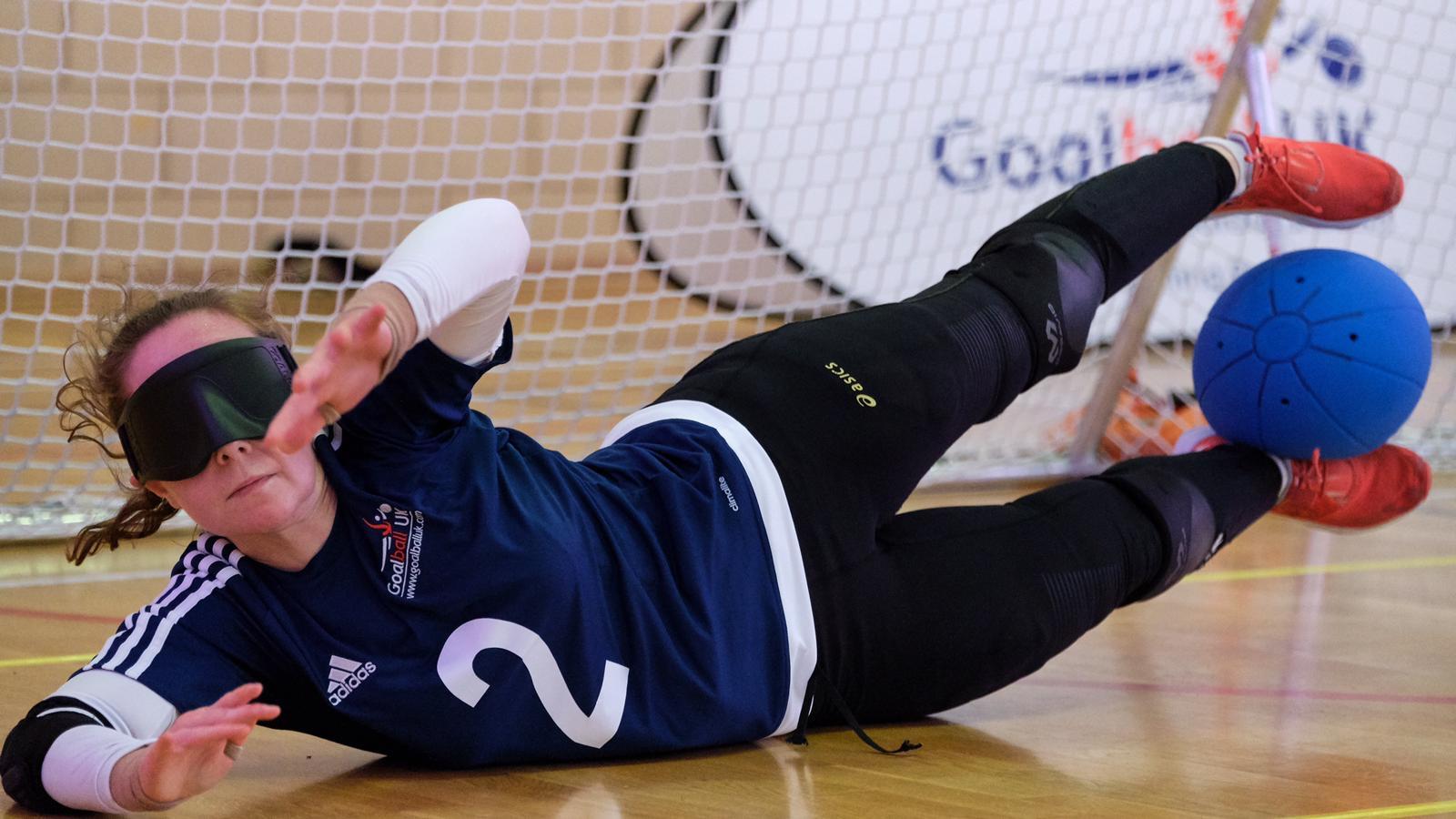 The progression from starting in the sport to becoming an elite athlete, with a shot at reaching the Great Britain squads, can be fairly rapid. But it comes with much hard work and determination.

Goalball is just like any other sport when it comes to reaching the top, with places in the Great Britain teams and on the talent pathway scheme being extremely competitive. Athletes must be willing to put in the hours training with their team and individually, as well as having the mentality to keep on developing their skills and improving.

Goalball UK is very hands on with the grassroots side of the game, which allows the coaches at Great Britain level to spot and develop potential early. Due to the strong community spirit of the sport, some of the best advice for younger athletes is to listen and learn from the experienced and elite players, who are always happy to pass on tips and discuss tactics.

Goalball is not only a great way to keep physically active, but it also helps develop many skills that visually impaired people can use in everyday life - from increasing awareness of your surroundings and mobility, to better communication.

It harnesses the positive impact of team sports and the comradery that is associated with it. For many visually impaired people, being part of a team and playing a sport can substantially improve someone’s self-esteem, which is a trait that is known to offset the negative effects of sight loss, especially for those born with vision.

Goalball can help to enable the necessary acceptance of a visual impairment, help to focus on the remaining capabilities instead of deficits and make them more flexible in adapting to different ways of completing activities. 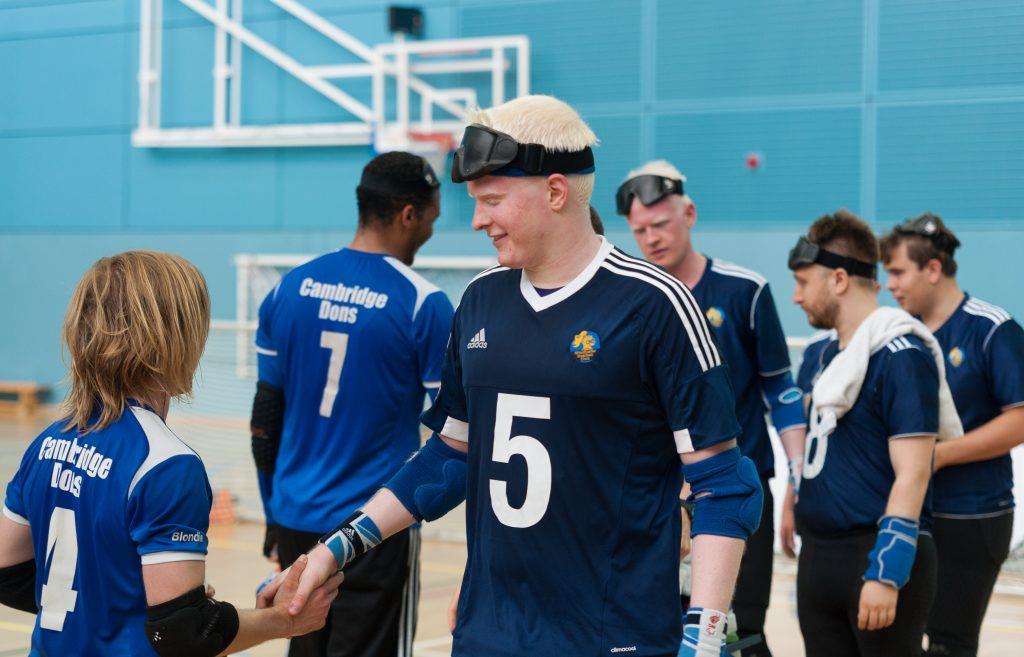 “When I was younger, my two main sporting outlets were goalball and swimming and I was progressing well with both. But the time came for me to make a decision about which sport to pursue to help me realise my dream of representing Great Britain.

“I opted for goalball and haven’t looked back. It is such a unique sport, and for me personally, it has been so important. The welcoming community and family environment that Goalball UK strives for has enabled my confidence to grow massively and given me an acceptance of my eye condition.

“My progression from starting out at the grassroots level to becoming a Great Britain player has been fairly quick. At one of my first intermediate tournaments I was spotted by the talent coach and subsequently invited to an international youth competition in Finland in 2014.

“A year later I was in the squad with the senior Great Britain’s women’s team at a competition in Poland - it was here that I found the net for my first international goal!

“This was such a monumental moment in my journey. Being able to score against some of the best in the world really gave me the belief that I could make it at this level and an added motivation to continue progressing each day. 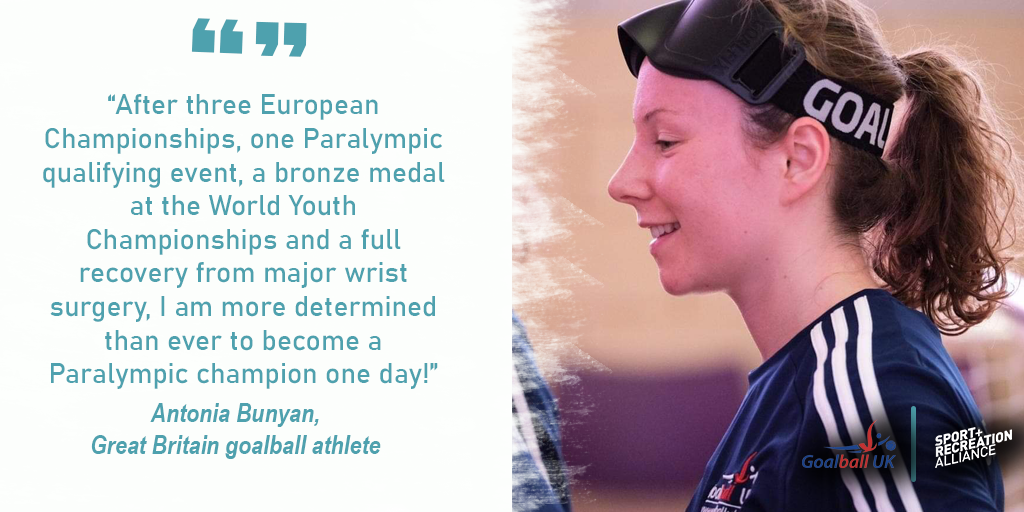 “There are so many reasons why people of all ages and abilities should give goalball a go. As well as the benefits you get from a physically demanding sport, new players will be welcomed into our goalball family with open arms.  The chance to meet people and players from all walks of life and learn from others within the community can be a great boost for your wellbeing as well.

“Since I began playing goalball, it has grown significantly and even more performance programmes have been launched to develop young and talented athletes. Now with more funding and investment in the sport, it really is a great time for new players to explore starting their own journey.”