Game, set, match: Wheelchair tennis is bouncing back into action 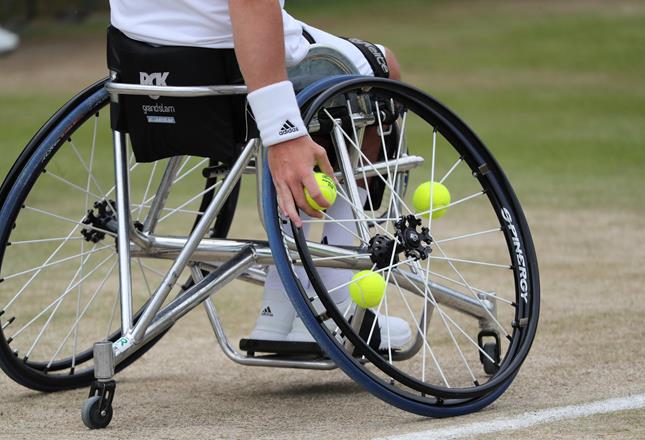 Wheelchair tennis was founded in the 1970s and is one of the fastest growing wheelchair sports in the world.

For the first time ever last year, all four Grand Slam tournaments included men’s, women’s and quad singles and doubles events on the competition schedule. This represented a significant moment in the sport’s history and the upcoming Paralympic Games promise to be just as revolutionary.

Great Britain is regarded as one of the leading nations in the world for disability tennis.  At an elite level, players are supported through the LTA’s World Class Wheelchair Tennis Performance Pathway as they compete around the globe on the ITF Wheelchair Tennis Tour.

At the grassroots, this growth in exposure and success has helped to inspire more disabled people than ever before to pick up a racket, with participation numbers seeing a five-fold increase since 2012.

Whatever level, there are countless opportunities for people to get involved and the LTA is here to tell us more about this fantastic sport!

What are your ambitions for the British team going into the Paralympics?

We showed at the last Paralympics and at recent Grand Slams that Great Britain has some of the best wheelchair tennis players in the world, and so we head to Tokyo knowing that our leading players have a chance of winning medals in Japan.

The level at the top of the sport is incredibly competitive though, and fine margins are often the difference between going out in an early round or winning gold. Our ambition for next year is to ensure all of Great Britain’s players are as best prepared and supported as they possibly can be to enable them to play their best tennis, showcase the sport to a wider audience and inspire the next generation.

What are some of wheelchair tennis’ greatest Paralympic moments?

The great Peter Norfolk winning our first ever medals in Athens has to be one of the standout moments and the catalyst for the success that has followed. ‘The Quadfather’ took quad singles gold and partnered Mark Eccleston to silver in the doubles.

London 2012 was special for all Paralympic sports, but it was especially so for wheelchair tennis as Peter Norfolk was chosen to carry the flag at the opening ceremony. Peter leading out the whole British team for such an iconic event was certainly a proud moment for everyone that has been involved in wheelchair tennis and demonstrated just how far the sport has progressed.

In Rio, the British team won more medals than any other nation, claiming one gold, three silver and two bronze medals, not to mention the all-British final in the men’s singles between Gordon Reid and Alfie Hewett.  From winning our first medals 12 years earlier to being one of the leading nations in the world, it really has been an amazing journey.

First and foremost, get out on the court and enjoy yourself – more and more people playing and having fun, irrespective of their level, is what we want to see most.

For those that then have the talent to progress further, the LTA have the programmes in place to help develop that, including an exciting junior programme with some of the world’s best young talent.  However, the journey to every Paralympic medal always starts with someone getting out there and just giving something a go.

Peter Norfolk is an all-time legend of the sport in Great Britain, having won two Paralympic gold medals, 10 Grand Slam titles and three World Team Cup titles, paving the way for the current generation of players, who are themselves fast gaining legendary status.

Gordon Reid joined Peter as a British wheelchair tennis Paralympic champion in 2016 having claimed the men’s singles gold in Rio, and has 13 Grand Slam titles to his name across both singles and doubles.

Alfie Hewett, who Gordon defeated in that Rio final, has himself won 10 Grand Slam titles (he will be defending his US Open title next week), and the duo are now the top ranked doubles pair in the world.  Alfie also became the sport’s youngest ever world number one when he claimed the top spot in the ITF rankings in 2018, aged just 20.

Jordanne Whiley is Great Britain’s most successful female wheelchair tennis player, with 11 Grand Slam titles to her name, together with two Paralympic bronze medals won alongside Lucy Shuker in the women’s doubles in both London and Rio.

Andy Lapthorne completes Britain’s quintet of current Paralympic medallists, with three medals under his belt in the quad division, in addition to 11 Grand Slam titles. Like Alfie, he will be defending both his singles and doubles titles in New York next week. 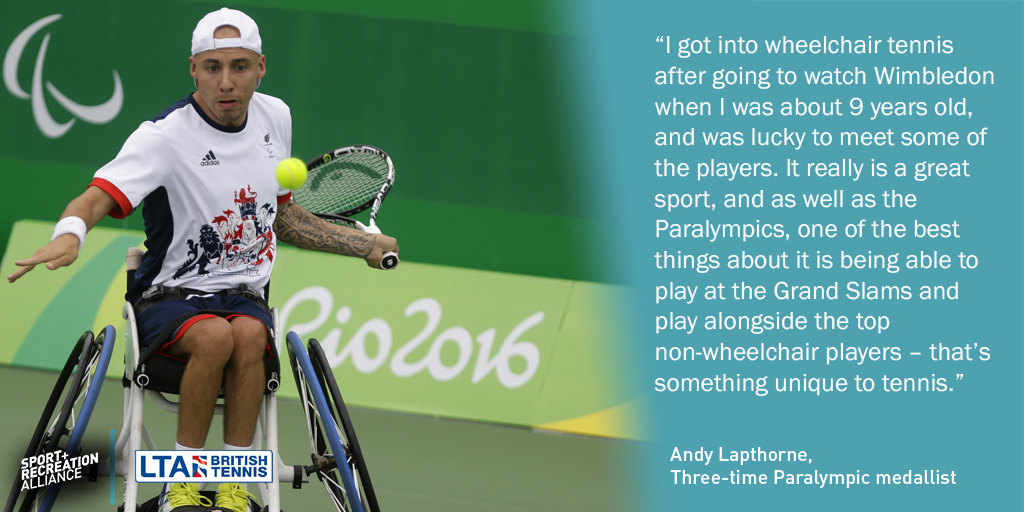 Who is wheelchair tennis ideal for?

Wheelchair tennis is a great sport for anyone who otherwise would not be able to play tennis on their feet, and any age or ability is welcome.  There can be a common misconception that the sport can only be played by those that use a day chair, but that is not the case. Some of Britain’s leading players such as Andy Lapthorne, Jordanne Whiley and James Shaw do not use a wheelchair in their day-to-day lives, with their sports chair being like any other piece of sports kit that they use to play tennis.

If you are interested in giving disability tennis a go, we’d urge you to get along to your local tennis venue and try out the sport!  You can contact the LTA and we can help you find a venue.

All the equipment and aids you need can be supplied. There are sports wheelchairs if you have a physical disability and require the use of a wheelchair, and tennis balls that make a noise when they bounce if you’re visually impaired.

There are also lots of opportunities for disabled people to get involved in tennis beyond just playing that the LTA can assist with, including volunteering and coaching. For instance, for coaches, the LTA operates a grant scheme for disabled people to take their LTA Level 1 or Level 2 coaching qualification. 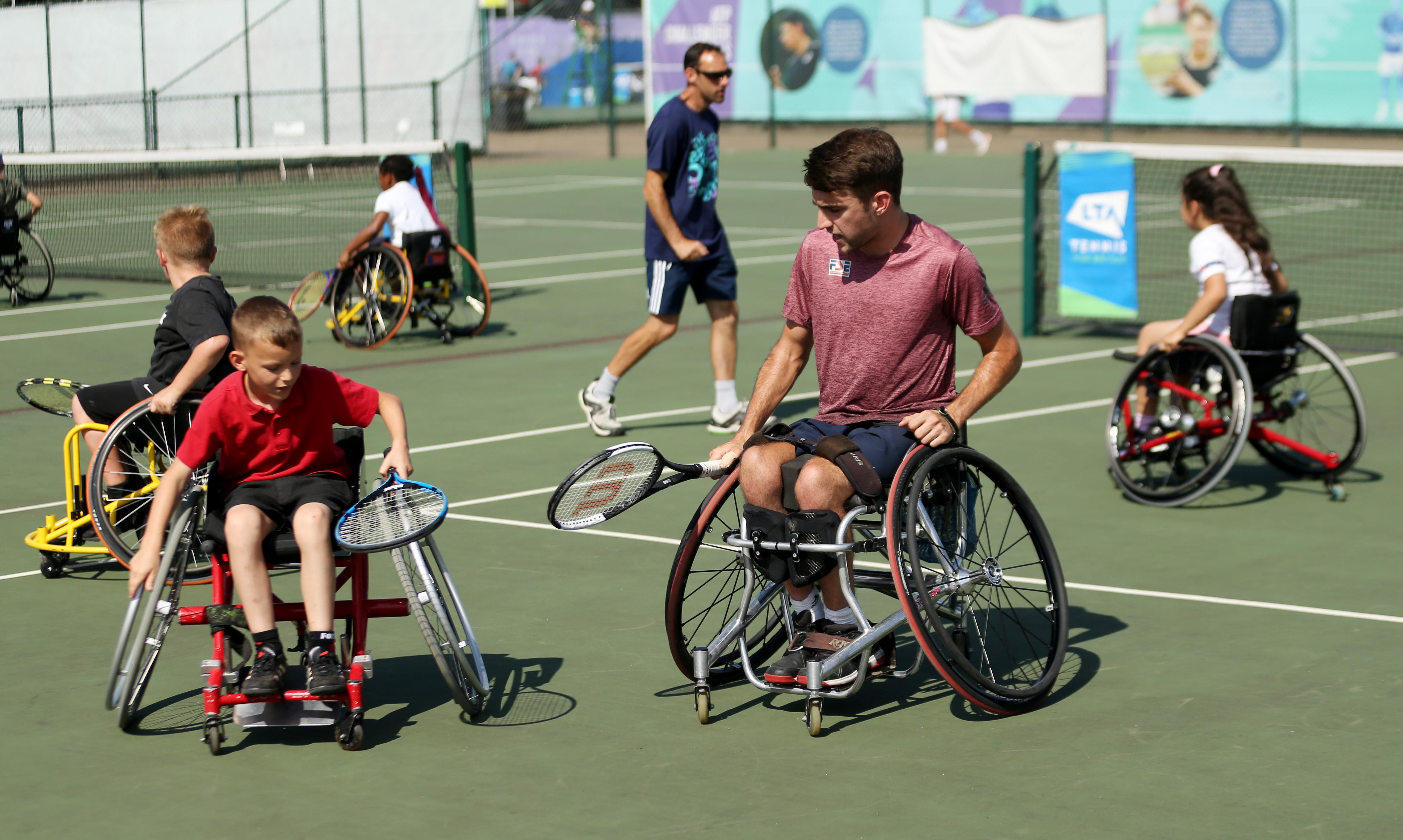 By picking up a racket and starting to play, you can help yourself not just become physically fitter and more active, but also happier, more confident and less stressed.  And that is not to mention the fantastic social side of the sport, helping people to build up their social network and make friends for life!