Did I try my kit on?

James Allen, Director of Policy, Governance and External Affairs, and chief instigator of the #TryYourKitOn August Challenge, reveals what he learned from participating in a month of daily physical activity.

Casting my mind back to August 1st, fuelled by caffeine and judgement affected by the sleep deprivation that characterises new parenthood I took the momentous step of challenging all my colleagues to Try Our Kits On and get active every day in August. In the interests of practicing what we preach, this seemed like a good idea and so the August Challenge was born!

I set out with the aim of doing something every day – with the additional challenge of moving house, having just become a Dad and returned to work from paternity leave. In some ways, this was the worst possible month to allow my bravado to take over. However, I am pleased to report that I did it with some form of sport or exercise completed every single day. It involved much more active travel rather than just exercising for its own sake than I’m used to – including using train strikes and seemingly non stop delays and cancellations (thanks, Southern Rail) to build in walking, running and cycling to my daily commute. The quality and duration of my sessions was nowhere near as good as it used to be. The variety wasn’t always brilliant either, with more repetition and a few things that if I’m honest I found pretty boring thrown in there to make up the numbers.

I mostly enjoyed it though, with the added element of encouragement and threats of humiliation from colleagues if I failed. One month on, I certainly haven’t been active every day but have continued to use the routines of running and cycling for parts of my commute, fitting in short sessions of 10-15 minutes a couple of times over the day and also being more disciplined about snatching a spare bit of time at lunchtime now I don’t have the luxury of putting it off to the evening or going for a long cycle or run or playing tennis, football or whatever else I used to be able to choose at the weekend.

I did get a few particularly fun things done during the month too – I tried one new sport (bowls), rekindled a long dormant love of badminton with the birth of the Alliance Badminton Club and got some miles of the Surrey countryside in on my under-used road bike. I tried open water swimming in London (in the Serpentine) for the first time, with a number of unimpressed looking swans and ducks and some bemused looking tourists for company. I didn’t get to the Velodrome at the Olympic Park to try track cycling, but am determined to do that and to swim at the Aquatics Centre in the next few months. I’m still not quite sure about the use of the high diving boards though. 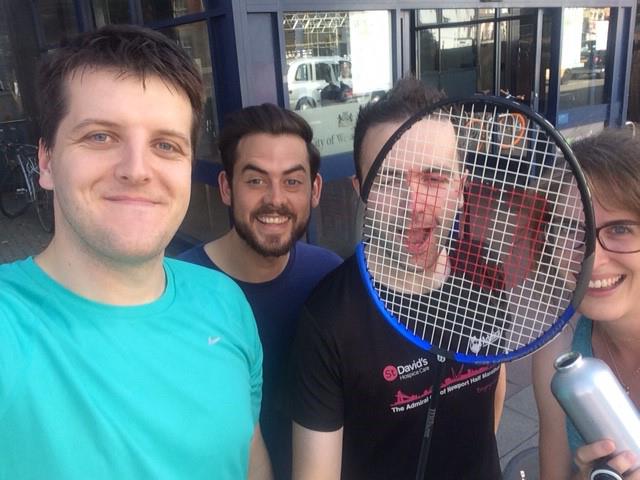 The biggest and most serious lesson for me though was that, despite being reasonably fit and having a lot of experience and enjoyment from years of different sports under my belt, having less time and having childcare responsibilities makes things much, much harder. I have quickly developed more empathy for people who say they have no time for exercise whereas I’m not sure I ever quite believed it before. Behaviour change of course is incredibly hard, but I also learned the power of a challenge and the positive effect that the  encouragement  of peers can have to make it happen. I’m still loving regularly trying my kit on, and although it’ll be a while before I have time to do as much training as before, having less time on my hands has made me appreciate the value of sport, recreation and getting active more than ever.