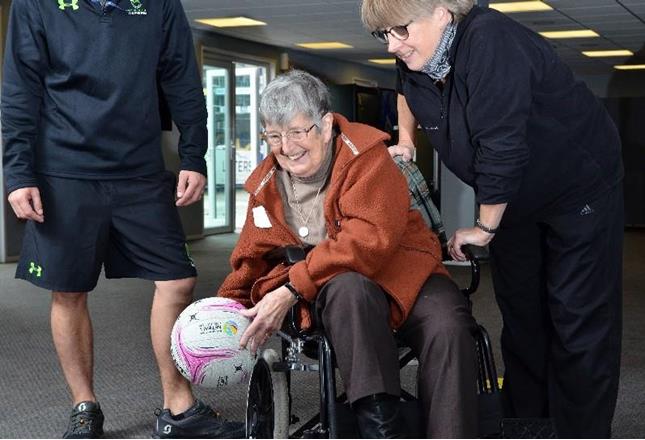 Worcester Warriors, a Premiership rugby club in the heart of the Midlands, runs the Warriors Community Foundation’s Tackling Dementia Sports Café which engages with around 75 individuals with dementia each week.

The café is led by Simon Northcott, Warriors Disability and Inclusion Lead, who had the idea after becoming a Dementia Friends Champion.

The free, weekly group aims to provide a service for anyone living with dementia, including family and carers. It offers a safe, informal environment for everyone to meet and provides a chance to re-kindle past sporting experiences using the club’s world class facilities.

The rugby pitch seeks to encourage movement and the Warriors open their doors for rugby matches, including games where members can take part.

The flexibility of the café allows members who may feel uneasy on their first visit to build their confidence and become more involved over time.

One member attending for the first time felt the café wasn’t for him as he had only recently been diagnosed and therefore not as advanced as some of the others in his disease progression.

By listening to his views, they have made provision for him to become a volunteer at the café rather than just another participant. This was welcomed by the member, his family and Warriors as an organisation, aiding his ‘coming to terms with his condition’ in a way which matched his needs.

The Warriors have also trained over 130 staff and volunteers to become dementia friends.

One of the stadium’s corporate boxes has been handed over as a safe place to people who want to watch the rugby in a less crowded or quieter environment.

The club is also part of its local Dementia Action Alliance, which are organisations that have come together to make their community more dementia friendly.

Key learnings for the sector

Simon added, “This group is for people to relax, play and have fun. We’ve created an environment which is relaxed and fun. It offers every attendee something they enjoy from seated curling to colouring in pictures”.

To find out more about the Tackling Dementia Sports Café, please click here.

If you have a case study which highlights how you've positively engaged with people in your local area, please get in touch with aburgess@sportandrecreation.org.uk