James Allen, Director of Policy, Governance and External Affairs, analyses how the House of Lords, and other sectors, would perform against the governance benchmarks set for the sport and recreation sector.

Today marks the first date for compliance with A Code for Sports Governance (Code) and so we’ll be reflecting on the current state of play across the sector and the work we've been doing with our members to deliver tangible, sustained improvements to governance.

One of our ongoing concerns has been a pervasive sense of negativity about the governance of our sector. These are both within, and particularly from outside the sector, with a seemingly endless range of media stories and comment, and pressure from government and elsewhere on the need to raise our game. There are undoubtedly incidents in sport and recreation (along with every other sector) and examples of poor practice and it is beyond question that we could do more to tackle these and to raise overall standards. However, it is also very clear to us that standards have improved markedly in recent years and that sport and recreation actually compares very favourably with other sectors.

One of the major, and to a large extent legitimate, criticisms of sports governance has been a lack of diversity at Board level. A lot the attention and pressure on our sector comes, quite rightly, from Parliament. So I would like to do a short report card on the House of Lords to assess how well this key institution currently governs itself and how close the Lords may currently be to complying with the mandatory Code and also how they would score using the framework of our The Principles for Good Governance for Sport and Recreation (The Principles).

Here are some facts and figures from January 2017 that help illustrate if the Lords complies with the Code: 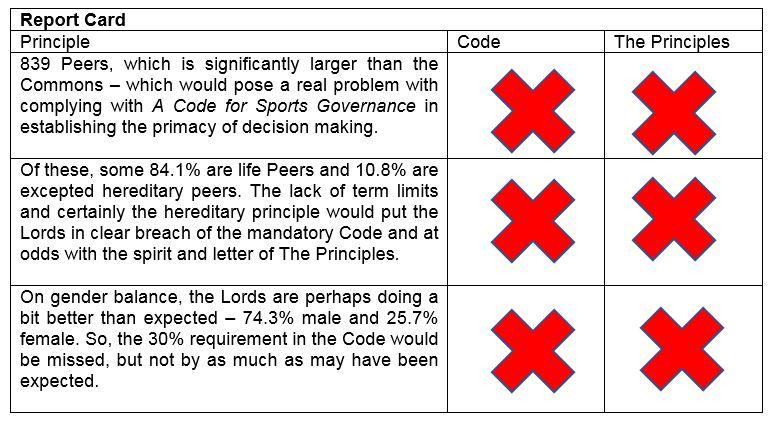 There are no other specific targets in the Code or our The Principles, but the following facts may suggest an issue, and certainly areas that need to be worked on:

· Finally, only limited data (and this data is over 3 years old) exists on BAME composition and disability in the Lords – but the approximate respective figures are 5-6% and unknown (but very likely under-representative). These figures again may strongly suggest a lack of diversity.

I’m not sure how many members of the Lords will have read The Principles of Good Governance for Sport and Recreation, but there are a few that may be worth some particular attention:

· Principle 4: Board structure: “balanced, inclusive and skilled (Board), reflecting the diversity of the community it serves”. Specifically, the The Principles would suggest that the appointments process directly addresses the issues of both diversity and skills – noting that the Lords appointments process is a topic for considerable debate in itself. Crucially, size matters – and it can quite strongly be argued that the Lords are simply to big – bigger than the Commons and becoming unwieldy as there are simply too many people.

· Principle 5: Controls and compliance – the Lords has very well-established protocols and procedures, but arguably could do better in monitoring standards and performance and certainly in communicating these with the public.

· Principle 6: Accountability and Transparency – promoting a culture of transparency and wide engagement, with a strong sense of accountability to stakeholders. The Principles encourage many key developments here – but perhaps the most pertinent question is whether the Lords have done enough (or care enough to bother) to explain to the public their role, their processes for decision making and their contribution to the legislative process.

The Lords is of course an exceptional example, albeit with some parallels with our own sector, of an institution with well-established traditions and personalities, confronted with a rapidly changing external environment. The Lords, much like sport, is also an institution built over a very long period of time and will therefore also take a long time to change. The issues highlighted here around the Lords are also not a criticism of any individuals – and just like in our own sector there are many articulate and committed advocates for reform.

For wider context, and whilst I have used the Lords here as an institution where we already have relationships and dealings and therefore some knowledge, the issues that impact the Lords are just as prevalent elsewhere. These are challenges that most of our public institutions are wrestling with and in the interests of balance, some other interesting stats about other industries are that:

· Cranfield School of Management have highlighted the under representation of women on the boards of FTSE 100 boards (now at 26%, and around 20% on FTSE 250 Boards);

· The Law Society and others report a long term and significant under-representation of women, people from BAME backgrounds and people with disabilities in the legal profession;

· Reuters have reported that as many as 70% of top jobs in financial services, the law and other professional occupations were to selectively and privately educated graduates in 2014.

What is also striking is how much easier it is to criticise another sector than our own institution and, indeed, in some cases how much more enthusiasm there is for ‘others’ to reform than to start closer to home. It would also be unfair to single out that particular institution for criticism without also acknowledging first that there has been significant progress in the last 10-15 years. In addition, the challenges the Lords faces are common to many other sectors and institutions – including the judiciary, the financial services sector, government more widely, the media and many more.

Let’s make our collective focus about continuing to raise standards across our sector and in contributing positively to tackling these issues in wider society.

You can find out more about the composition of the Lords here.