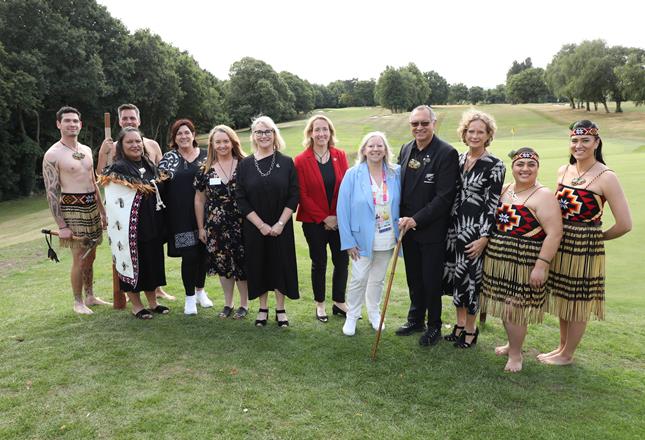 The Commonwealth Games in Birmingham provided the ideal backdrop for the official handover ceremony for the Secretariat of the International Working Group (IWG) on Women and Sport.

Birmingham 2022 is the first major multi-sport event in history to award more medals to women than men, while the debut of women’s T20 cricket has proved one of the success stories of the competition so far.

The event, attended by Alliance Chair Dame Janet Beer and CEO Lisa Wainwright MBE, was also an opportunity for global leaders to discuss what more can be done to achieve gender equality in sport and the benefits of doing so.

Established almost 30 years ago in Brighton, the IWG is the world’s largest network dedicated to advancing gender equality in sport and physical activity. The network is committed to leading positive change which aligns to the UN Sustainable Development Goal to achieve gender equality and empower all women and girls.

The IWG is currently hosted by New Zealand; with the 8th IWG World Conference on Women & Sport taking place in Auckland on 14-17 November 2022.

The UK will then receive the hosting baton for the quadrennial period of 2022-2026, with the 9th IWG World Conference taking place in Birmingham in four years’ time.

The bid to host the IWG was led and co-ordinated by the Sport and Recreation Alliance and received the support of over 100 organisations in the physical activity sector including Sport England, UK Sport, Sport Northern Ireland, sportscotland and Sport Wales.

As a part of the Alliance’s strategic commitment to support the improvement of equality, diversity and inclusion, the most influential, impactful and diverse voices from sport and recreation were convened to make this happen and we look forward to playing our part as leaders from across the global sporting stage.”

IWG Co-Chair Annamarie Phelps CBE OLY added: “In the week when England won the women’s Euros, helping to catapult women’s sport into the spotlight like never before, it’s the perfect time to be pushing to achieve gender equality across the globe.

“The IWG network is a platform to both advocate for change and share insights and learnings to help advance gender equality, harnessing the knowledge and momentum from within the IWG movement.”

Sports Minister Nigel Huddleston said: “It's been a seismic week for women's sport with the Lionesses’ stunning victory at Wembley and many incredible performances at Birmingham 2022.

“While women’s sport continues to go from strength to strength, we know there is more to be done to support women both on and off the field of play.

“The handover of the IWG is an incredible opportunity to build on the success so far and to push for true gender equality in sport.”

Registrations for the 8th IWG World Conference on Women & Sport are open with the event due to take place in Tāmaki Makaurau Auckland, Aotearoa New Zealand and online from 14-17 November 2022. More than 1,200 global leaders and influencers are expected in person with another 500+ virtually. Over 220+ sessions have been scheduled, with nearly 500 global presenters confirmed.

The early bird registration deadline has been extended to 31 August 2022, allowing more participants to access discounted rates. For more information and to secure your place, please visit – www.iwgworldconference.org